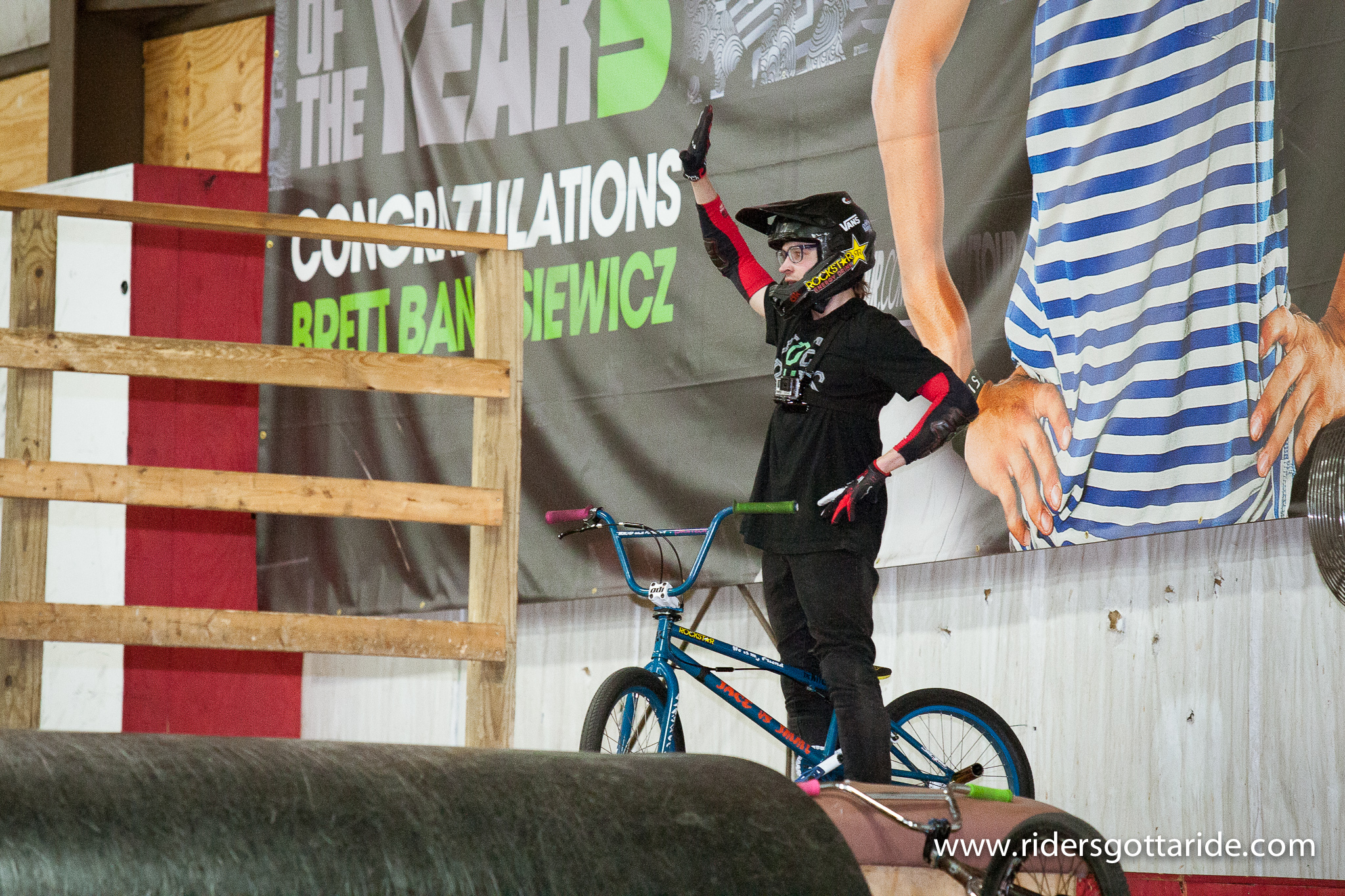 The 4th Annual Kitchen Pro Am got under way on March 21, 2015.  Saturdays events included the Beginner Class, a WCMX demonstration by Shaun Doss, and the highly anticipated PRO Class.  This year was a touch different for the PRO Class as there was no advertised Pro Purse, also this year would be the 1st year for Brett Banasiewicz to ever compete in his hometown contest.  In the years prior, Brett chose not to compete, but to open the doors to his home park for others to use his playground as they see fit.  2013, and 2014 saw Brett’s fight for recovery and the support for the annual contest industry wide was strong.  This year, nearly 2 1/2  years after his horrific accident is the year that Brett would make his comeback to professional competition.

The Pro Class this year showcased a bunch of talented riders that set the stage for yet another big show to rain down on South Bend, Indiana.  Local news crews have been following Brett and the Kitchen skatepark story and much of the audience were locals showing their support.  Brett is literally the biggest thing in South Bend, right after Notre Dame University’s football program.  Local support for the Kitchen this year has been fantastic, while support from some of Brett’s former sponsors and the BMX industry itself has been off in comparison to the past 3 years at the Pro/Am.  This year is the year that people came together, not for the money or the notoriety, but for the sport of BMX and to show support for all that Brett has accomplished personally as well as contributed to the sport.

Saturday afternoon got directly under way once open practice came to a close. The beginner heats started rolling out as spectators started rolling in.  12 Beginners made their way around the course as the crowd cheered them on. The Beginner Class win ended up going to the well deserved 12-year-old, David Osterhouse, 2nd Place, Addison Waelbroeck, rounding out 3rd was Tyris Yoder!

Once the beginners finished up their runs, Pro qualifiers began and the Kitchen began to heat up!  Qualifiers were extremely tight as the judges had to break it down to just 10 riders for the finals.  Highlights from the qualifiers include, Brett Banasiewicz’s 1st run back on the bike which was very emotional for everyone in the building. Brett absolutely killed his run throwing out a massive downside whip, a backflip, tuck no hander transfer, and he brought the roof down with the cheers from everyone in attendance.  Another highlight was Danny Rumple, front flipping the 20′ long and low.  (video below)

After Qualifying we ran for the 2nd year a street jam that was crowd funded.  We sent the Maddog around with a bucket to have people throw in for cash prizes and ended up with $150 to toss out for tricks on the street course.  No rules and a whole lot of banger tricks were thrown down by the likes of guys like, Joey Ross, Joe Weist, Alex Liebrock, Chase Pauza, Tommy Crail, and Glenn Salyers to name a few.  The win ended up going to Glenn Salyers as he had the most amount of cash in his pockets when the money ran out!  Congrats to everyone who entered the street jam, especially the guy who came out of 1985 with his American Flag helmet!

After the street jam, we got introduced to an amazing 11-year-old young man by the name of Shaun Doss.  This young man has inspiration written all over him, he is confined to a wheelchair and has made his way to near stardom with his fearless attitude while doing stunts on it!  The 1st few times you see someone fall in a wheelchair your like OMG is he okay?  After you get used to seeing Shaun crash his wheelchair you start to realize that this young man is having the most fun he possibly can, he is definitely not going to let anything at all get in his way and I for one am stoked to call him my friend.  Shaun put on a pro caliber demonstration of this awesome sport dubbed “WCMX” and absolutely blew the crowd at the Kitchen Skatepark off their feet!

Lastly on Saturday we came down to the highly anticipated PRO FINALS.  The field was stacked with Pro riders from all over the country.  The action was heavy and hard as the pros dropped in one at a time to see who would reign supreme at this years contest.  Flawless riding out of guys like Colton Walker and Trent Newkirk put them in the top 2 spots while Rob Armour & Nick Bruce where scratching at their heels to get a piece of the pie.   The one who ended up on top was the factory Haro rider, Colton Walker as he flew through the course throwing out banger after banger with a clean and super smooth style.  The Maddog pulled a clean topside no-footed can to earn his share of the love.  All the Pros absolutely killed the park and really put on a great show for the big crowd in South Bend this year!  Colton handed his winnings straight back to Brett and said to put the money towards the SaveTheKichen Fund.  Chad Walker (Colton’s Dad) is one proud dude!