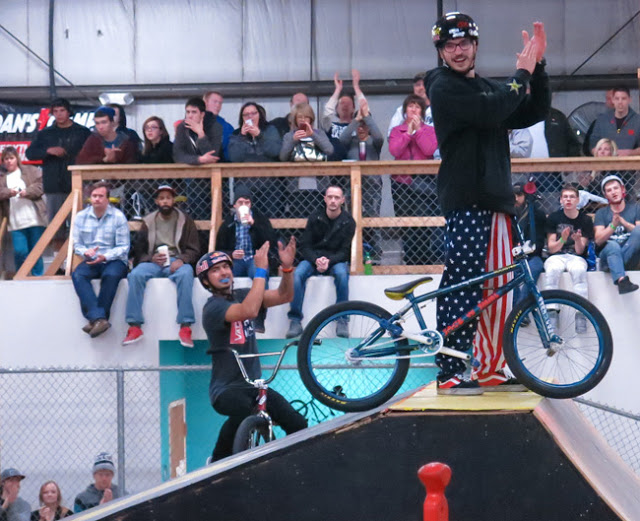 The Kitchen BMX &amp; Skatepark’s 3rd annual Pro/Am competition started in typical Maddog fashion with Brett in a car chase with the South Bend Police Dept.  Fifteen minutes into our live feed Brett called to warn me he was coming in hot with the cops on his tail!  Once he shook the coppers, Brett grabbed his BMX and took a few hot laps around his park before stopping atop Mt. Banasiewicz (the newly built huge step up). The entire building erupted with applause as we kicked off an amazing weekend in South Bend, IN.

The day began with the beginner class warming up on the course quickly followed by the Pros for qualifiers.  The new course layout was well received by the Pros and they were surely having fun with it.  The amount of transfers and new lines being used on the course was no less than insane to see in real life.  All of the riders were killing the park that Brett built!  As expected, Pro Qualifiers were off the chain and I for one am glad I wasn’t a judge for this one. 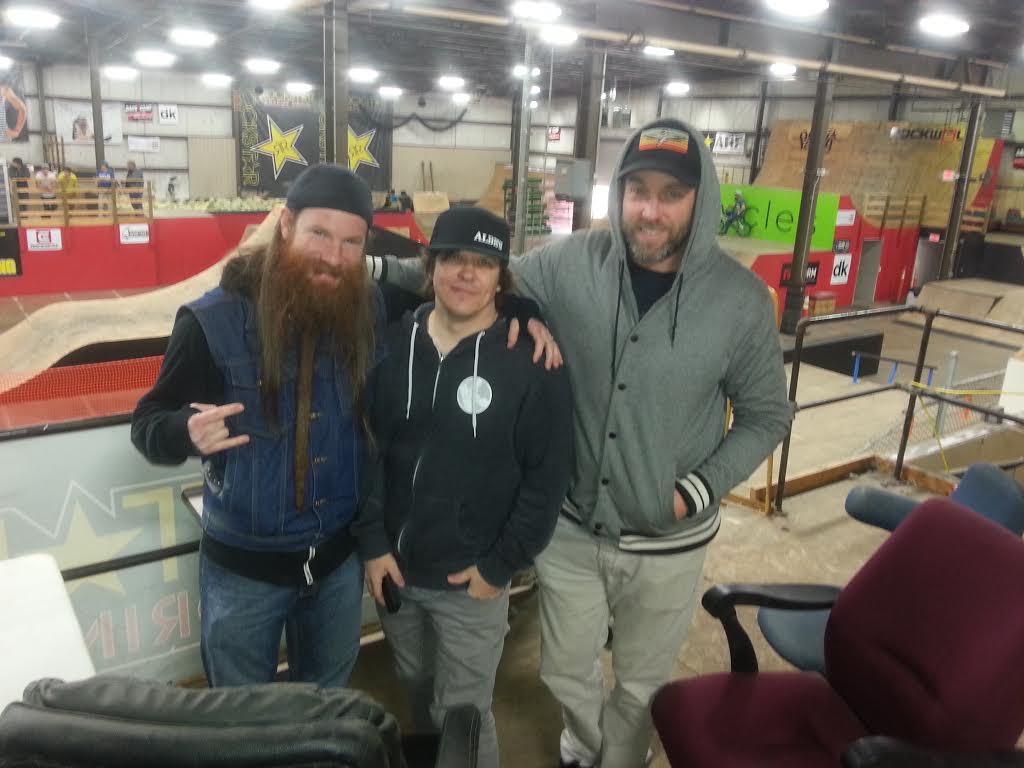 Prior to the Finals we held a round of “Crowd Funded” Street Competition.  What is this you ask?  This is when we ask everyone from the crowd pitch in $5 bucks to help make it rain on riders killing the street course.  The rider with the most cash at the end of time is pronounced the winner, and their cash is the prize. The competition got off to a great start with Chris Gerber, Ryan Guettler and the Maddog himself throwing out $$’s for bangers. The whole clan ended up with at least some lunch money, but Glenn Salyers won the most loot rounding in at about $250. 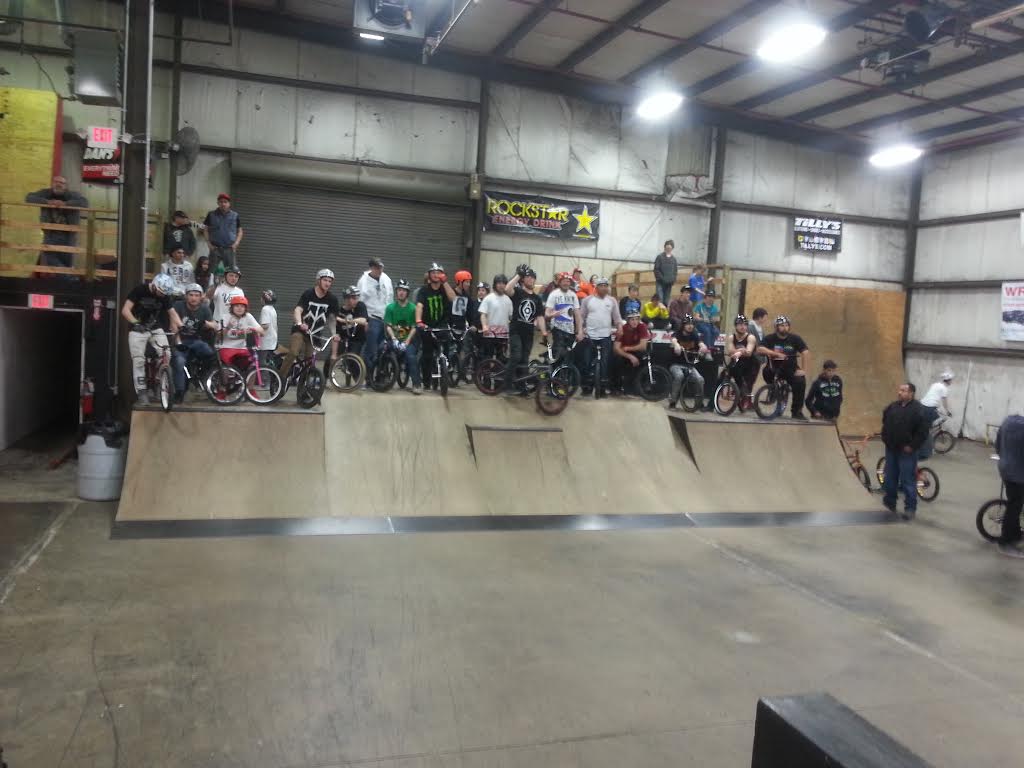 The “Starting Gate” for the Street Comp 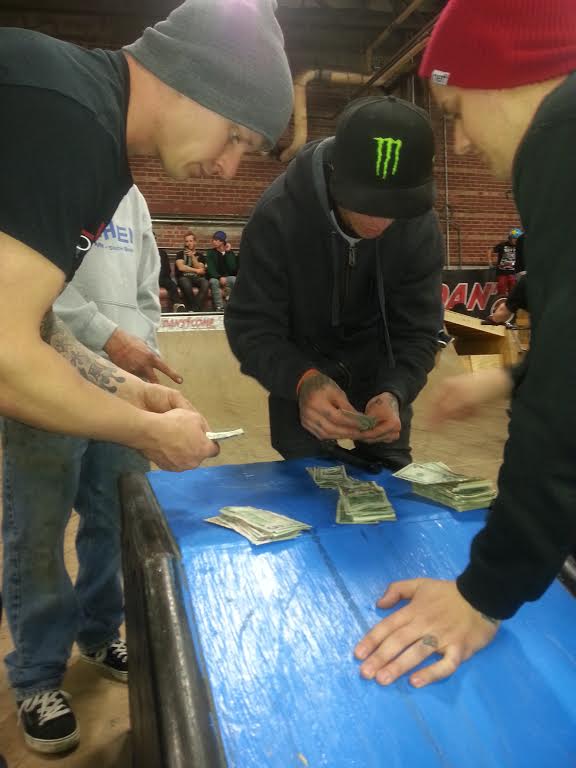 Chris Gerber (stocking cap) with Ryan Guettler (Monster hat) counting up the near $500 worth of donated money for the street comp! 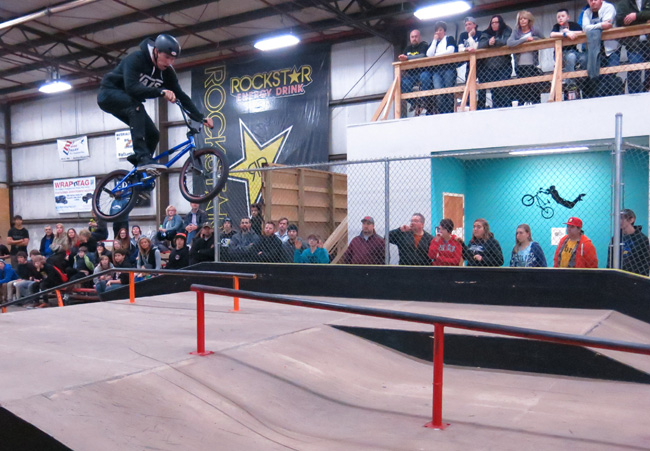 Long Distance Gap to the Red Rail was one move that won some $$’s – Photo Credit: Dans Comp

The Saturday night Finals went off with explosive power.  Daniel Sandoval placed 3rd this year highlighted by a “Tailwhip to Decade Air” that you can find on any social media outlet.  2nd Place went to Alex Landeros who has an odd taste for raw oysters and killing huge gaps on the box section.   1st place was awarded to Mike Varga, the only male Canadian to enter this year’s contest.  Mike completely worked the Kitchen over throughout the weekend.  A well deserved victory, Mr. Varga!

This year’s competition featured The Kitchen’s first ever live feed.  This addition enabled spectators from all over the planet to watch the action live on the Web.  A big thank you to Walton WebCasting for doing an amazing job, we look forward to doing it again next year!  Also, a big thank you goes out to Justin Hardin from Solution Action Sports for helping out with the registration process as well as emceeing the live feed with me and special guest, Chris Gerber.  We had a few appearances by the house emcee DK Bicycles very own, Trevor Gay.  The standard issue locals like Jordan Bowen, Danny Rumple and Brandon Wolfman were also on hand and rode with the Pros..  I had the opportunity to interview many of the big names like Daniel Sandoval, Ryan Guettler, Brandon Dosch, David Leib and Big Ben Eyelander to name a few.  For more details and live action make sure to check out the 6+ hours of live feed via the link at the bottom of the page! 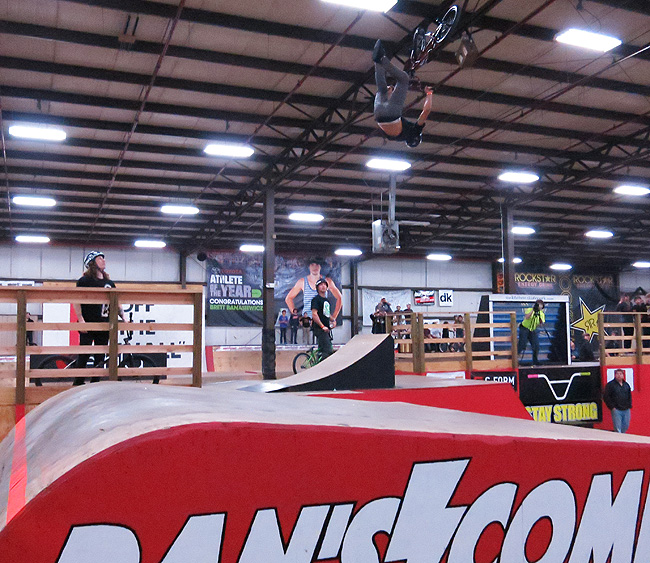 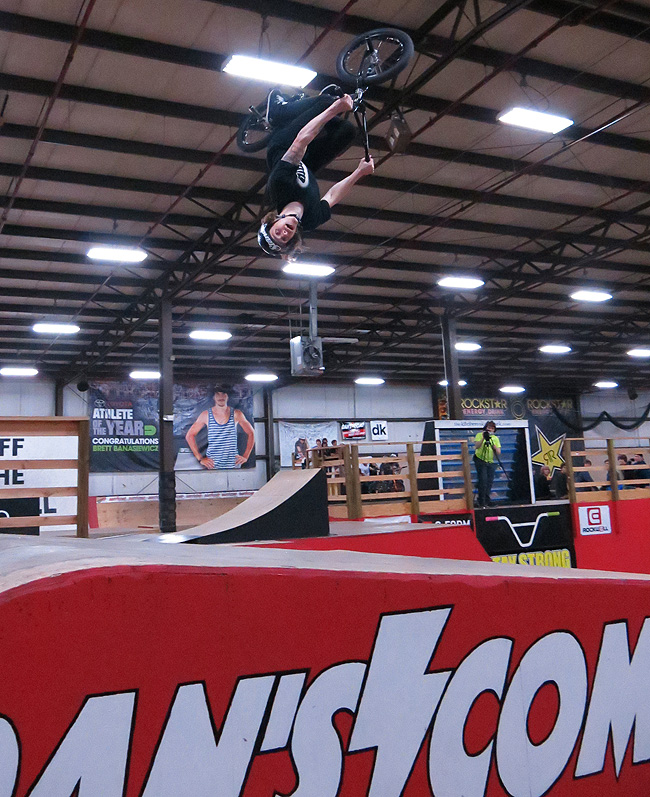 Another addition to this year’s competition was an amazing showing from the girls in BMX!  I had the pleasure to call these fine young ladies on the in house mic.  All the ladies did a fantastic job out there! 3rd Place in the Girls Class went to Janet Kukulski who even surprised herself with the podium as she just started riding back in September 2013.  Keep at it Janet, you’re killing it.  2nd place went to a well-deserved, Nikita Ducarroz who came out swinging with a backflip on her very first run!  1st Place was awarded to our local 12-year-old, Hannah Roberts out of Michigan.  Hannah wowed the judges by doing tuck no hander transfers and flying around the Kitchen with ease.  Hannah is so hardcore that she injured her wrist and refused to go get it checked out until after the awards presentation.  In my eyes, all of the girls did an amazing job in this contest! 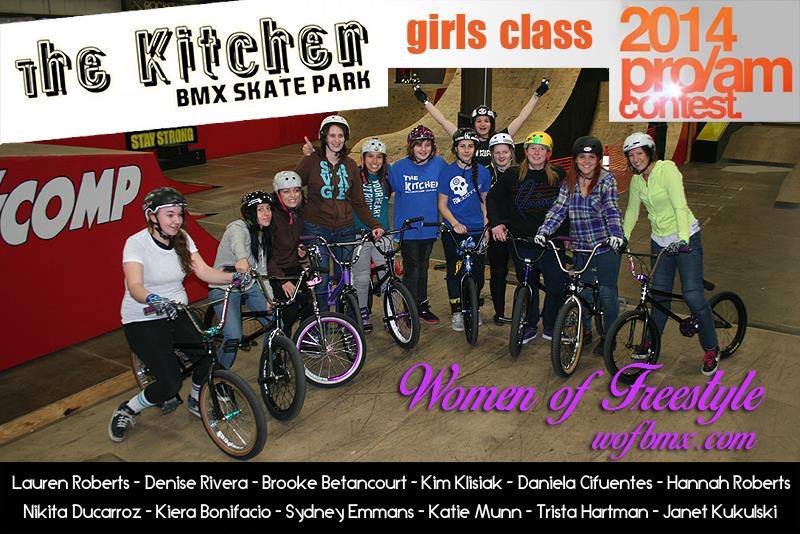 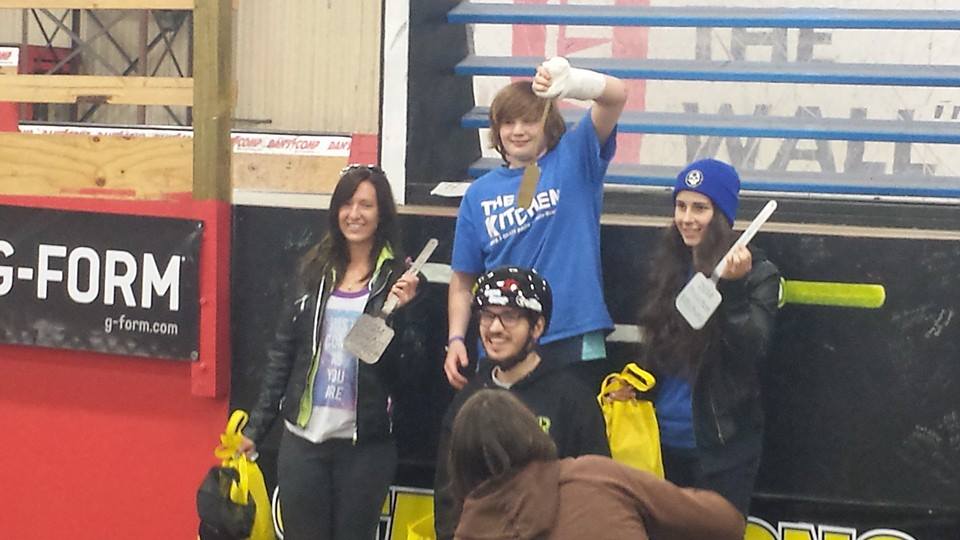 The Intermediate & Expert Classes also went down on Sunday.  The “New Jersey Crew” definitely came out and turned up the Kitchen oven all the way up!  Eddie Rovie topped up the Intermediates, while Matty Cranmer takes it for the Expert Class, both from Jersey, Incline Club Represent! 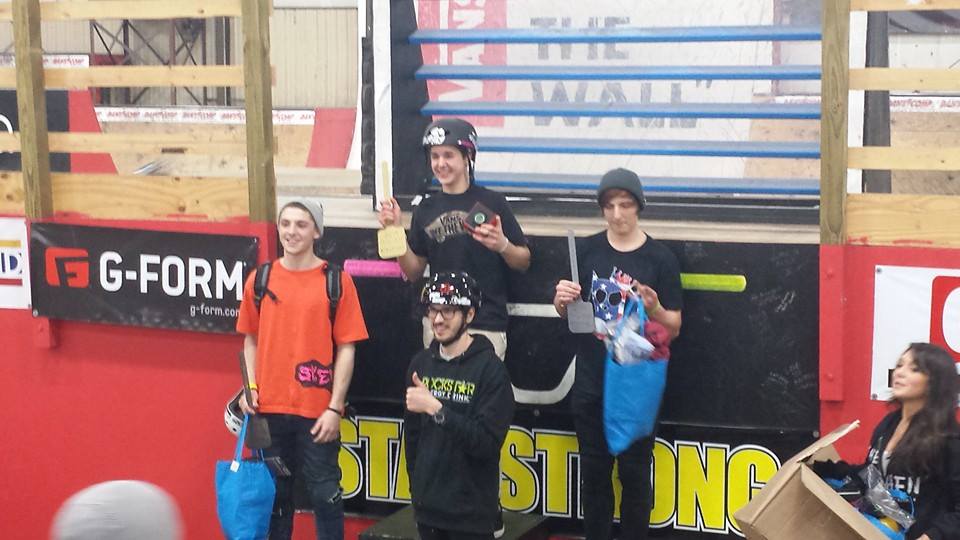 A huge thank you to everyone who supported this event in one way or another.  And very special Thank you from myself directly to Bill & Lisa Banasiewicz and all of the Kitchen Staff who helped keep the weekend together.  I can’t wait for next spring to come around Northern Indiana!  See all of you at a BMX event somewhere real soon!

Here is a video of the Pro Finals done a fellow rider Tristan aka “TwisterX15” on Youtube Give him a follow!

Born and raised in Fort Wayne, Indiana with a serious passion for some BMX! You will find me announcing BMX shows all over the mid-west for Solution Action Sports, Wonder Wheels BMX Team, as well as contests BMX, FMX, and Skateboarding.